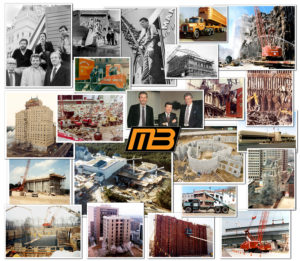 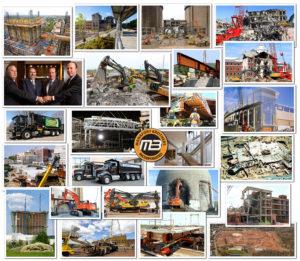 In 1919, Manafort Brothers Incorporated began its journey to become the construction and demolition services leader it is today. Founded by James Manafort as the New Britain House Wrecking Company, we were known primarily for demolition in those early days.

As the decades passed, the company established a superior reputation and great success in the industry. In 1946 the company was renamed Manafort Brothers Incorporated and was managed by James Manafort's four sons; Anthony, Frank, John and Paul. During the years to follow, the firm came to be the region's premier demolition company including being recognized year after year by Engineering News Record as a top Demolition Contractor nationwide.

As two more decades passed, Manafort evolved, choosing to expand into excavation and concrete foundation work. A third generation of the Manafort family, James, Frank and Jon, led the firm to even further widen its focus to concrete, civil and utility, demolition, abatement and remediation, highway and bridge, nuclear decommissioning, rail and mass transit construction. Like before, Manafort became a leader in these market sectors within the region while also being recognized nationally as a top 10 firm by Engineering News Record in certain specialty market sectors and even achieving a #1 ranking in the Excavation and Foundation category in 2000.

An established reputation has led to us being called upon for unique and first of their kind projects. One occasion that stands out occurred shortly after 9/11 when our involvement was requested at Ground Zero in New York City in 2001 to assist in the demolition and removal of the World Trade Center buildings. Unique and highly specialized also were the decommissioning and demolition of the Connecticut and Maine Yankee Nuclear Power Plants. The Maine Yankee Plant became the first nuclear power plant to be decommissioned in the U.S. The Mashantucket Pequot and Mohegan Tribal Nations engaged Manafort to support the rapid development and construction of two of the largest casino complexes in the world, Foxwoods and Mohegan Sun. In the states of Connecticut and Rhode Island the Department of Transportation (DOT) did the same by selecting Manafort to lead each state’s first ever design-build projects; the rapid bridge replacement using Accelerated Bridge Construction for the Connecticut DOT RT 8 Bridges Replacement Project in Bridgeport, CT and the construction of the Wickford Junction Commuter Rail Station in North Kingston, RI.  These are but a few of the examples of how Manafort has built on the foundation of its simple beginnings a century ago.

Today, Manafort is still led by the strong ethics and established reputation of the Manafort family.  As a 4th generation family-led business, Jim Jr., David, Justin and Jason continue to lead and evolve the firm as an integrated, dynamic construction and demolition contractor.

Headquartered in Plainville, Connecticut, we have locations in the greater New England area in Worcester, Massachusetts and Cumberland, Rhode Island, and service clients primarily in the northeast United States, but also at selective projects nationally.  We take an active part in giving back to local and state communities to show our appreciation for the success we have been afforded.

As we recognize our first 100 years, we are steadfastly dedicated to applying our distinctive engineering knowledge and dynamic approach to the construction and demolition contracting industry and a new generation of challenges.